Iconic snack foods are transformed in Rewrapped, a new competition series hosted by Joey Fatone. From Twinkies to Goldfish to SpaghettiOs, three competitors use their talents to recreate and innovate America's most beloved snacks. First, the challengers attempt to duplicate the original item from scratch. Then it's onto the second round, where they must use the snack food in a completely original dish. Led by head judge Marc Summers and a panel of expert judges, only one can be crowned the Rewrapped champ! 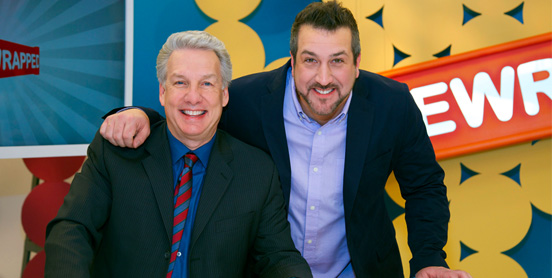 On Unwrapped , Marc Summers revealed how timeless snack foods were made. Now, he's the lead judge on Rewrapped , helping to determine which competitor's creation is worthy of the grand prize - a lifetime supply of snacks.

Former *NSYNC star Joey Fatone is a natural entertainer, with film, stage and screen appearances. Joey previously competed on Food Network's Rachael vs. Guy: Celebrity Cook-Off  and Chopped All-Stars , and he has appeared on Dancing with the Stars .