ADVERTISEMENT
IN PARTNERSHIP WITH
Wall of Chefs

For Chef Mandel Hitzer, the most successful home cooks competing on the Wall of Chefs do many things extraordinarily well, but also have two special ingredients in their secret sauce that help them stand out: they pay attention to tiny details and keep it simple.

And when it comes to success, Mandel definitely knows a thing or two (or three!) about how to make things happen. Mandel has been in the culinary industry for more than 20 years, opening his restaurant deer + almond in Winnipeg’s historic Exchange District in 2012. Since then, it has twice been named one of Canada’s 100 Best restaurants (2017 and 2018) and has received numerous accolades from critics and fans alike for its food, atmosphere and culture. His pop-up series called Raw: almond has also been celebrated as one of the best in the world by Conde Nast (alongside Noma, named the world’s best  restaurant in the world and another world’s best, El Bulli).

With this mind, who better to ask about this season’s most celebrated moments and take-aways from the Wall of Chefs set than Mandel himself? 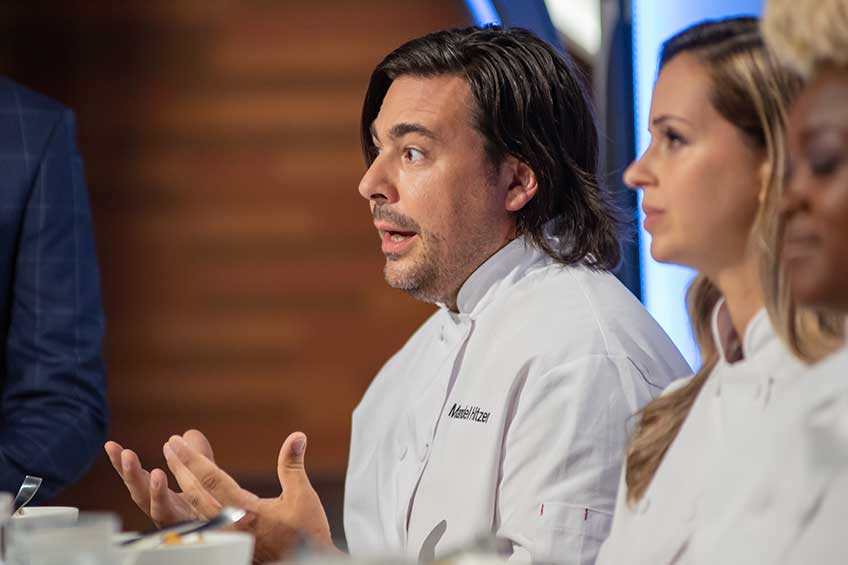 Since the first season, have you changed your judging style on the show?

I think it could be a product of COVID-19, but for the past two years, it’s been the best and worst thing that’s happened to me. But as a cook, especially as a home cook, it’s made me much stronger and brought me right back to my roots. On the business side, it’s actually brought me back into my kitchen in a different kind of way. Because of the shutdown, I was forced to “trim the fat” and literally stop the lifestyle that I had. So coming back for the season, there’s a totally different energy about me. I’ve been able to calm down and take time to smell the roses. I gardened for the first time in my life, and I’ve cooked more for myself in the past year and a half than in the past decade.

Do you think the pandemic will change the restaurant dining experience?

I think there’s actually going to be a wonderful new renaissance of our culinary scene in Canada. If I were to forecast anything, I see a lot of the classics coming back. There’s going to be new restaurants that come up where maybe sous chefs and young cooks are now going to take that leap on their own and try something for their own. I also think there will be a lot more cooking from the heart, things that make you feel good – a lot more soul food.

Related: 17 Expert Tips From the Culinary Greats on Wall of Chefs

Did a particular home cook stand out for you this season?

I was blown away by the level of cookery and it seemed to be all strong, especially in the very first round. Everyone that did their crowd-pleasing dish, [judging] it was really tough. There was a crowd-pleaser dish with salt cod with chickpeas with rice. And even when I was watching the episode [at home], I could feel the warmth in my heart. I could taste the dish in my mouth.

There is such a great vibe between the chefs on the shows. Do you keep in touch with anyone?

I’ve become really close with Alex Chen from Boulevard. He is a legend. His level of cookery is off the charts and he is someone who has become a mentor. It’s opened up my culinary community in Canada.

If there was one dish on your menu to describe your restaurant, what would it be?

Something that has been on the menu from day one and people rave about is a dish called, baby potatoes. It’s an umami bomb and it’s absolutely fantastic. It’s deep-fried baby potatoes, tossed with Japanese mayonnaise and a rice seasoning, lots of scallions, a little iceberg lettuce and fish roe. The whole thing is garnished with nori and cured capicola. It’s my version of a potato salad. I can’t take it off the menu.

Any advice for up-and-coming younger chefs or home cooks that possibly might want to get on the show?

Remember to taste as much as you can and follow your heart, which is often a phrase that I tell my young cooks and apprentices in the kitchen. If you have a gut feeling or you’re like questioning something for a second, if you just take the time to think about the food and how you approach the cooking that you’re going to be doing to it, you’ll often find the answer you’re looking for.

This interview has been edited and condensed.

Watch Wall of Chefs Mondays at 10PM ET/PT. Stream all your favourite Food Network Canada shows through STACKTV with Amazon Prime Video Channels, or with the new Global TV app, live and on-demand when you sign-in with your cable subscription.