ADVERTISEMENT
IN PARTNERSHIP WITH
Wall of Chefs

Christine Cushing had an accidental career. Or at least that’s how she looks back at her past two decades as one of the most prominent food personalities in Canada. The chef was a master of all trades, so to speak, 20 years ago when she was feeding hungry hotel guests, punching out fresh dough, catering swanky parties, and hustling in a restaurant. But it wasn’t until she was hired to do a live product demo that a producer realized her big personality and infectious love of food belonged in homes across Canada.

“I had to do a five-minute audition,” Cushing recalls. “From that moment, it really tapped into something for me. When the camera light went on I realized this is what I love to do. Inspiring people and sharing what I know about food and getting them excited about it.”

Related: See What Made These Chefs Worthy of “The Wall”

Of course at the time Cushing thought she had bombed. She’d been given a laundry list of dos and don’ts heading into the audition, such as what to wear or how to act. Her brain bypassed all of that and honed in on the cooking aspect, to the point that she recalls showing up in jeans, “the ugliest green army t-shirt,” and zero makeup.

“I remember thinking, ‘Oh God, this is so done,’” she says. “But I decided to just do my thing. It was all about the food.” In the end that approach resonated with the decision-makers in the room. The formally trained chef’s ability to explain the Greek pizza recipe she had decided to make—and the fact that she offered customization options for different family members—convinced them to hire her for Dish it Out.

If that show allowed Cushing to become comfortable with cooking in front of the cameras, and taught her how to read from a teleprompter or work with producers, her next gig—Food Network Canada’s Christine Cushing Live—was a masterclass in TV on the fly. The series featured call-in questions from viewers and guest chef appearances as Cushing and her sous-chef, Juan Salinas, whipped up delicious dishes. Cushing admits she prefers to live in the moment, so the show was actually a perfect fit for her. And even better than that, doing the series made her learn to trust in herself and her abilities.

“For four years, four nights a week, we basically had to run a restaurant,” Cushing recalls. “There was so much learning, so much collaboration. But from a culinary standpoint, you just didn’t know what was going to happen. You didn’t know what would go up in flames. Which pan wouldn’t fit in the oven. It was really live—people were kind of shocked by that.”

After Christine Cushing Live wrapped in 2005, the chef remained a constant TV presence with series like Cook With Me, Fearless in the Kitchen, and a Chinese travel series, Confucius was a Foodie. She admits that travelling inspires her in the kitchen, but with the current pandemic she—like many others out there—has turned to comfort foods. She’s currently baking bread and crafting Italian classics and Greek favourites with a twist, like moussaka with grilled eggplant and zucchini, which she was prepping for dinner the day we spoke with her.

“In Greece, food is more of a shared experience,” she explains. “There are very few dishes that are singularly plated. You don’t necessarily do a portion of anything. It really is nourishing, it’s nutritional, but it’s [also] comforting and it has beautiful flavour.”

Those kinds of dishes also remind Cushing of her father, whom she calls one of her original culinary heroes. She recalls him being the kind of guy who would start thinking about what’s for dinner before they’d finished lunch (a trait she inherited), and she puts him up there with two of her other culinary heroes: Julia Child and Anthony Bourdain.

“Bourdain was one of my favourite guests on Live. He had kind of gotten huge television-wise and everybody had an impression about him and what he was going to be like,” Cushing recalls. “He was very energetic, just so articulate and fantastic. It was a very memorable night. Although he wasn’t a troubled individual, you could see those kind of dark moments in him throughout. I could sense it. But he wanted to go to a place and really find that truth. Just find it—not create it in advance. He was lucky to have had the freedom to do that because so often now, yes there is some latitude, but not too much latitude.”

Looking Towards the Future

These days, Cushing finds inspiration as one of the pros on Wall of Chefs. She’s of the mindset that you can learn from anybody, and the home cooks featured on the series are certainly proof of that. Even more specifically though, she’s impressed by some of the women in their early twenties that have come on the show, and with how well they’ve been able to think and react on their feet given everything the show throws at them.

“It happened a few times, actually, that all the chefs looked at each other and said, ‘I would hire her tomorrow,’” Cushing reveals. “That was super impressive. You think it’s experience that brings you to a level where you can impress a chef, but sometimes it’s youth and fearlessness.” 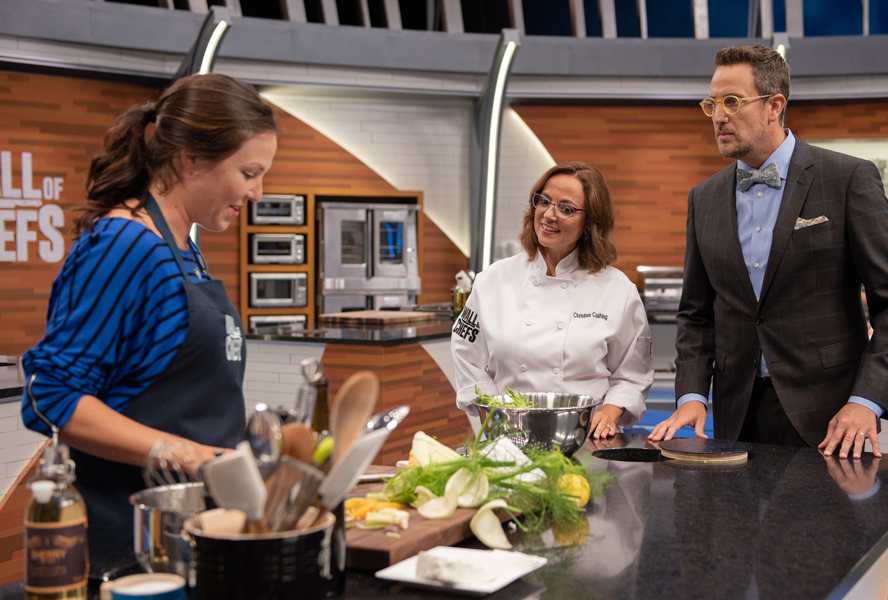 That’s exactly the type of feel-good programming that Cushing believes we’ll see in the next couple of years as the effects of the pandemic continue to play out. As we shift away from straight-up instructional shows and more into the collective experience of cooking, Cushing sees more of those personal journeys and connecting stories coming down the pike in her imaginary crystal ball.

“If anything, the past eight months or so have shown us [how to] connect, find meaning, collectively know that we’re all in this together as a planet,” she says. “We’ve really seen that in spades, and when we don’t experience that it erodes us as a planet. People want to be inspired and uplifted.”

Christine Cushing should know. She was, after all, one of our original inspirations.

ou can also stream your favourite Food Network Canada shows through STACKTV with Amazon Prime Video Channels, or with the new Global TV app, live and on-demand when you sign-in with your cable subscription.