Here at Food Network Canada, we love a good fried chicken sandwich. So when KFC Canada announced their spiciest fried chicken sandwich ever that just so happens to be exclusive to Canada, we knew we had to taste it for ourselves. The just-released Kentucky Scorcher harnesses the heat of the infamous Carolina Reaper pepper for their brand new Scorcher sauce, which is drizzled over a breaded chicken breast (from Canadian chickens!) that’s smothered in spicy mayo, then topped with crunchy pickles and sandwiched between a toasted bun. The new signature sauce boasts a Scoville level of 13,500 (that’s double the heat of Tabasco, if you’re curious). KFC is even offering a free bottle of milk with every sandwich (while supplies last) to combat the “scorching” effects. Read on for everything you need to know about the new offering, including our detailed review.

They do! The KFC Spicy Famous Chicken Sandwich has been a longtime menu staple, and does use the same KFC Spicy mayo as the Scorcher, however the main difference is that it does not have the new Scorcher sauce that’s packed with heat from Cayenne and the aforementioned Carolina Reaper.

So why did they need to make a spicier sandwich?

It all comes down to what consumers are craving. According to KFC Canada’s Innovation Director Ira Dubinsky, KFC Canada surveyed consumers and found that a whopping 50% “felt that the spicy chicken sandwiches currently on the market were not spicy enough.” Armed with that knowledge, KFC set out to solve that with the Kentucky Scorcher: “we like to call it an actually spicy sandwich,” explains Dubinsky.

Where can I find it?

The Kentucky Scorcher is available at participating KFC locations across the country for a limited time. Depending on your province, the sandwich will set you back about $6.99. 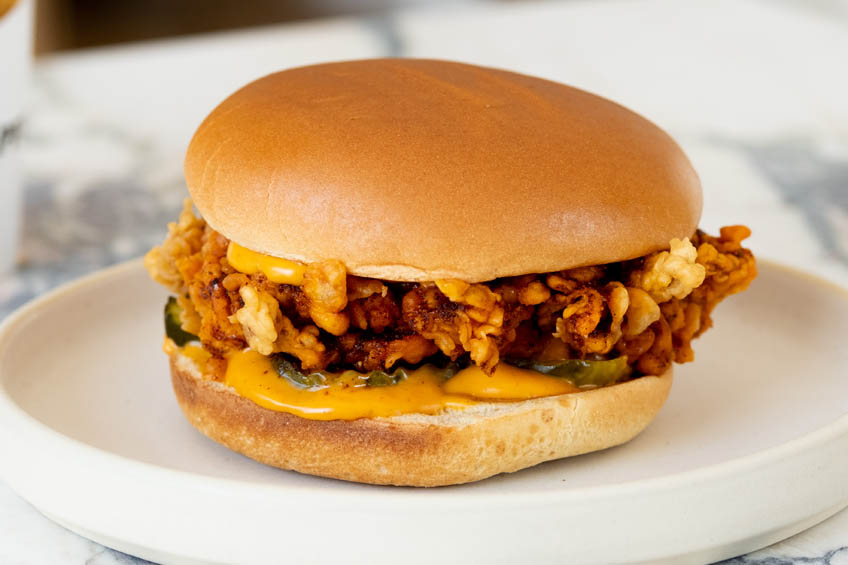 So, how spicy is it really?

Based on visuals alone, you’d expect this sandwich to have a real kick. Slathered in spicy mayo and dripping with Scorcher sauce, the sandwich has an inviting red glow that burns bright like a warning sign for what you’re about to get yourself into.

To account for varying spice tolerances, we had three staffers test the sandwich separately and report back. At first bite, the spice of the sandwich is deceptive. It tastes barely spicy at all. The heat builds as you get further into the sandwich, and gets hotter gradually. While this sandwich was probably one of the spiciest we’ve tasted from a fast-food chain, it’s still fairly mild and not the kind of spice that had us reaching for our milk like the name might suggest. We’d classify it as less of a scorch, and more of a slow burn.

Beyond spice, how tasty was it?

KFC is known for their fried chicken for a reason. The Canadian chicken breast is thick and juicy, the spicy mayo provides a nice creamy hit, and the crunchy pickles provide an acidic, tangy contrast. Overall, it’s a solid sandwich that keeps things simple and lets the core elements shine. While the spice was slightly underwhelming given the Scorcher moniker, it’s a fast and delicious way to get a finger lickin’ good spice fix. We’d recommend asking for extra Scorcher sauce if you’re really craving the heat.