Top Chef Canada Winner: An Interview With the Season 10 Winner

After numerous quickfire and elimination challenges, season 10 of came to an exciting conclusion in the Cayman Islands. It all came down to Trevane ‘Tre’ Sanderson from Toronto, ON and Deseree ‘Dez’ Lo from Vancouver, BC. In the end, Tre reigned victorious making him the first Black winner of Top Chef Canada.

From the beginning, Tre showed that age is just a number by winning the first elimination challenge with his jerk shrimp. He continued to show his culinary skills throughout the competition, all while staying true to his style and Jamaican flavours. 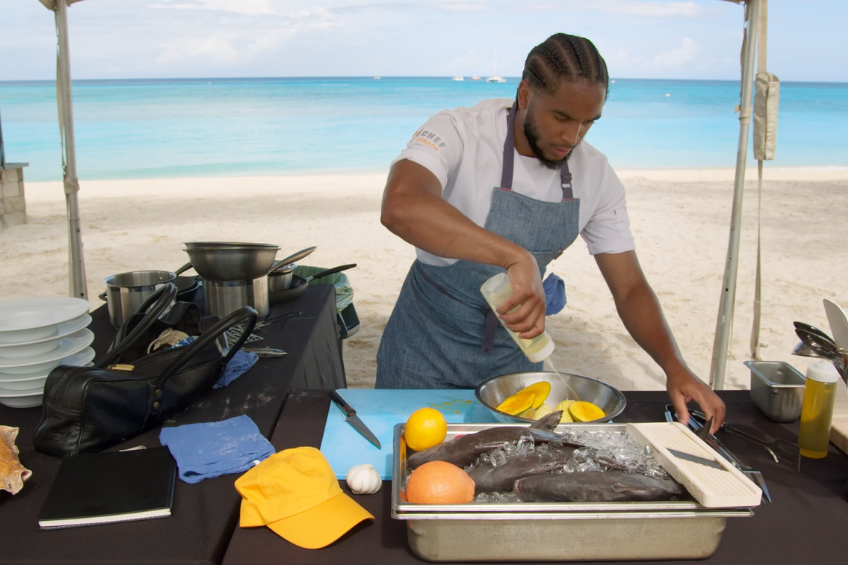 The final quickfire challenge was to take a local fresh fish and cook it over a wood fire grill, while also creating a Top Chef Canada quality dish. Tre was given triggerfish, a white flakey fish with a sweet flavour. We saw him struggle, as this was a fish he had never used before – but he pulled through and made his way to the final challenge.

In an “old school versus new school” battle, Dez and Tre were challenged to serve a five-course tasting menu for the Top Chef Canada judges. With the support of fellow competitor Camillo as his sous-chef, Tre served a menu inspired by his childhood, drawing influence from his Jamaican heritage.

His second main, a curry chicken breast with yam, Jamaican sweet potato puree and dumplings, did not wow the judges as he had hoped. Judge Mark McEwan also believed that Tre’s dessert – a spiced rum cake with glazed caramel plantains and cashew cream – was playing it a bit safe for the finale. However his other courses including a red snapper escovitch with caramelized shallots and roasted red pepper puree, blew them away and in the end – Tre was awarded the title of Top Chef Canada.

Following his victory, we caught up with Tre to reflect on the season and find out what’s next for this talented young chef. 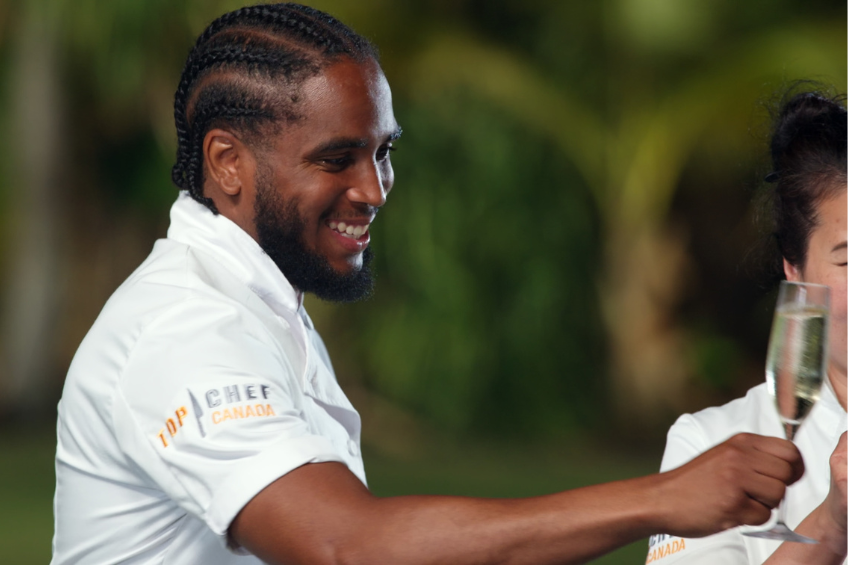 Congratulations on the win! How do you feel?

Thank you. Thank you. So many different emotions honestly and something like this, it’s kind of new for me. It’s kind of almost overwhelming, but it’s satisfying too.

A milestone, and historic moment due to you winning, is that you are the first black winner of Top Chef Canada. Congratulations on that as well. How does that feel?

It’s so historic. You look at the industry and… for me, I’ve been doing this for 10 years plus and being the first black chef to win this competition is iconic, it’s historic… memorable… and is inspiring! This means a lot and I’m so excited for what’s to come next, for the next generation. Hopefully I can inspire younger black chefs looking to be a Top Chef like myself.

What was the hardest part of this competition for you?

The hardest part, I think was not knowing what was [coming] next. Every day we were challenged, presented with new challenges and cooking on a different site. It was tough, you just never know when or who was going home next.

But you just gotta keep going and keep pushing, adjusting, and adapting.

On the opposing side of that, what was the most rewarding part of the competition, besides winning?

I think the most rewarding part was reaching the top four and getting flown out to an island. I’m an island boy at heart, so cooking down there to compete for the title was so rewarding. It almost felt like the season was meant for me in a way.

Did you feel like you were more comfortable when you were cooking on the island?

Honestly, yes. I think because [of] some of these ingredients… I grew up on this stuff. Having it [in] a fresh form, like fresh fruit, ackee, red snapper that’s literally been caught the day of… it’s so fresh, it’s so good, it’s so beautiful. A place has a big impact when the ingredients are fresh. So I was really excited and more comfortable on the island for sure.

Did you feel like there was anyone who was your biggest competition throughout the entire season?

Honestly no! Going into this competition, I wanted to give everybody a chance. We’re all here for a reason and we all have a story to tell. All 10 chefs were my competition.

The only thing I was nervous about is that these chefs have had a little bit more experience than me.  These are chefs that are accomplished. [Deseree] working in Michelin star [restaurants] in New York. Camillo winning numerous cooking competitions leading up to Top Chef, being under the mentor of the season eight winner. That’s huge! They know what they’re doing and they have a plan but that didn’t scare me. You know I’m on the island, I’m cooking [the] food that I know!

How did it feel to have Camillo be your sous chef for the final challenge?

Ideal. I think leading up to that at that point, us being the two youngest, we both kind of wanted to compete against each other. But him helping me execute my menu just goes to show that he’s talented, he knows what he’s doing. He has a really great perspective [on] food, and I have so much respect for him. Cam being my sous was sick. It was definitely a memorable thing. I definitely would love to do some work with him in the future. 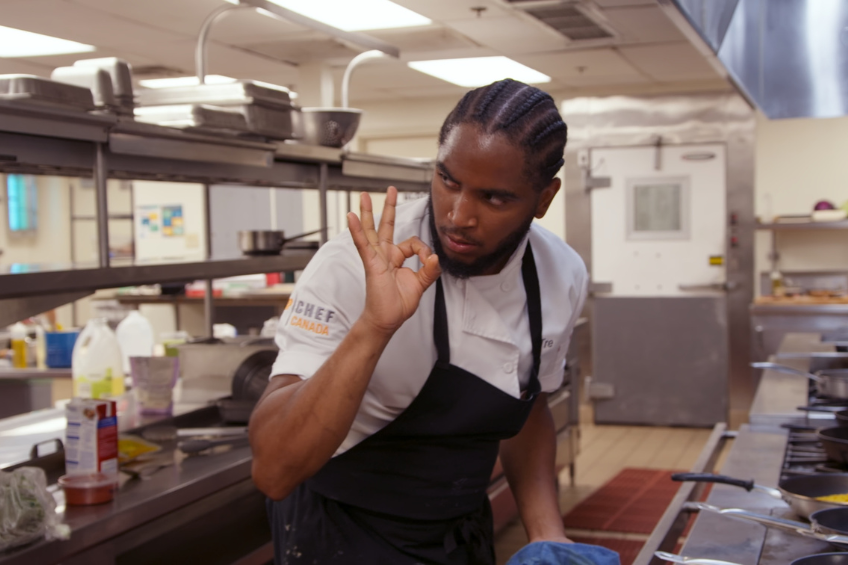 You also got some one-on-one time to chat with Chef David Zilber. What was some of the best advice that he gave you?

That seems like something that you did throughout the competition. You were very true to yourself and true to your flavours.

Yeah, that’s the thing! This is the food that I know and that I grew up on so I wanted to take some of the techniques and flavours that I’ve learned along the way from different cuisines, different chefs, and really try to make it my own. I think a lot of times, chefs like to mimic or copy and paste. For me I [want to] put my own name on my food and my cuisine.

You said yourself that going into this competition you had the least amount of experience. Do you think that gave you an advantage at all?

I don’t know if it gave me an advantage, but it made me hungry. It made me want to push hard. We all got selected to be on the show and to fight for the title. It definitely helped me because I kind of had a chip on my shoulder and really kind of pushed through.

In the Cayman Islands, you mentioned that Chef Kerryann Burnett inspired you because she has a fine dining Caribbean restaurant. Who else inspires you in the culinary world?

Adrian Forte. Adrian being on [Top Chef Canada] and seeing him being so successful and having his own cookbook. He’s led the way for a lot of us young black chefs and he’s an ambassador for what’s to come for Jamaican cuisine. He’s definitely inspired a lot of us like minded chefs, like myself, that are pushing Jamaican cuisine towards a higher level. 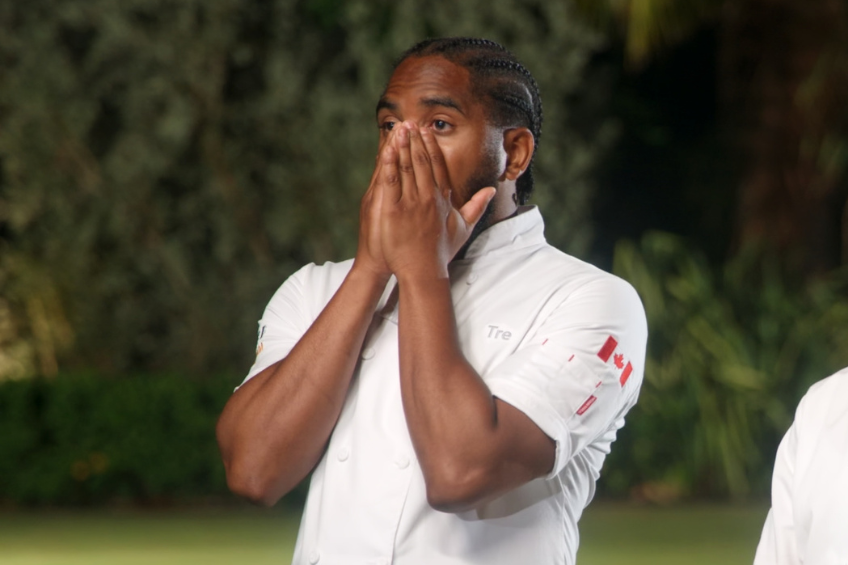 Your 5 course finale menu was inspired by your childhood. If you were to serve a dish that represents this Top Chef Canada journey, what would it be?

It would be the classic Jamaican patty, but in a Wellington form. I [would] take a filet and have it in a brioche, turmeric spiced pastry, with a nice Jamaican sweet potato puree.

You’re from Toronto – what are some of your favourite restaurants in the city?

Some of my favourite restaurants… Alo Bar. I really like Good Fork. What else? I think Yasu’s really sick!

What advice do you have for any chefs wanting to go on Top Chef Canada?

The advice I would give is just be yourself. Don’t try to conform and do things that you haven’t tried before. Believe in yourself. Believe in the cuisine and the food that you know and just cook from your heart. That’s what brought me through the whole competition. I know what my style is. I know what I want to do and I know what I’m striving for and that’s to bring Jamaican cuisine at another level.

Be creative. Have fun. Have fun is the biggest one! It was [the most fun] thing ever. I was screaming at the top of my lungs!

What’s next? What are you going to do now?

Right now, I’m planning on pop-ups around the city with local chefs. In the near future, bringing In The Palace to life. That’s a restaurant! Fun, exciting, diverse, different. I really want to change…  like a little bit how the Toronto culinary scene is [with a] different kind of space and restaurant. Showcasing different talented chefs around the city. Look out for Tre! See what he does next.

This interview has been edited and condensed.

Related: 10 Years of Top Chef Canada – Where are the Winners Now