ADVERTISEMENT
IN PARTNERSHIP WITH
holidays

How to Make the Best Latkes Ever

Hanukkah is almost upon us, and latkes are an absolute essential at any Hannukah feast. Latkes are potato pancakes that are fried in oil to symbolize and celebrate the miracle of Hanukkah, when the oil of the Jewish Temple menorah lasted for eight days instead of just one. Whether you’re looking to make your own latkes for the first time, or you’re a seasoned pro hoping to make your latkes extra tasty this year, read on for how to make the best latkes ever this Hanukkah.

What is the best oil to cook latkes in?

The best oil to cook latkes in is one with a high smoke point, like avocado, canola, peanut or sunflower oil, which all have a smoke point of 400°F or higher. Because latkes can take a while to cook, this ensures that your latke can have a nice crispy and golden exterior without getting burnt. If you’re looking to really take your latkes to the next level, opt for chicken schmaltz (AKA rendered chicken fat) – a staple in Jewish cooking that you can often find in kosher butcher shops. You can use a 1:1 combination of chicken schmaltz and oil for a truly over the top latke experience.

Related: A Guide to Cooking Oils: Everything You Need to Know

How do you get crispy latkes?

Get the recipe: Latke Charcuterie Board

What to serve with latkes for Hanukkah?

Traditionally, latkes are served with applesauce and sour cream. However, they also pair beautifully with caviar, smoked salmon, or even as the centrepiece of a stunning latke charcuterie board with fresh veggies, herbs, pickles and your favourite tangy cheese.

What are the best potatoes for latkes?

What are the best onions for latkes?

This comes down to a matter of preference: yellow onions are traditionally used in latkes, and provide latkes with a sweet, sharp flavour. However, many cooks opt for green onions, white onions, or a combination of onions. 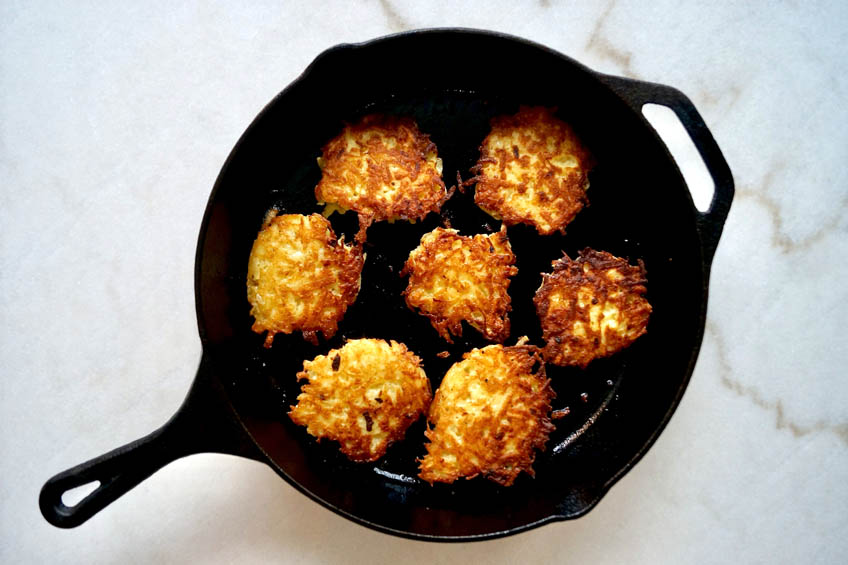 What do you fry latkes in?

The best tool for frying latkes is a cast iron pan. Cast iron pans distribute heat and evenly retain heat, meaning that your latkes will cook at a consistent temperature.

Watch: This is How Michael Symon Cleans His Cast Iron Pans

What’s the best way to season my latkes?

The trick to a tasty latke is the right amount of salt, applied at the correct time. Don’t add salt until you’re ready to fry your latkes – if you salt too far in advance, you will draw moisture out of the potatoes and create a gloopy batter that results in dense latkes. That said, when you do add salt, be generous with it, as latkes require more salt than you might expect. Our tip is to make a test latke before proceeding with the whole batch, so you can add more salt as needed. Alternatively, many cooks also opt to sprinkle latkes with salt as soon as they come out of the frying pan.

What temperature do you fry latkes at?

Get the recipe: Vibrant Rainbow Latkes

How can I make my latkes extra special?

To really take your latkes to the next level, try subbing in new ingredients like beets, sweet potatoes, carrots, or purple potatoes to change up the textures and colours of traditional latkes. You can also get creative with your cooking method, and try making latke waffles or even a latke cake.

Read more: 16 Delicious Recipes for a Happy Hanukkah (From Latkes to Rugelach)